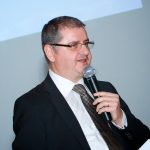 Gaëtan Lefèvre joined BELRIM in 1999, first as the representative of InBev where he worked as Risk & Insurance Manager until 2007. He then joined CMI. In 2008 he became a BELRIM board member and three years ago Gaëtan followed Marc Mathijsen as BELRIM’s president.

Under Gaëtan’s presidency BELRIM got a strong, new impulse. As a born leader with a charismatic personality and a legendary taste for good food and wine, he decided to make sure that the monthly exchanges of the association would not only be top class seminars but also first rate networking opportunities. The growing number of attendees can vouch for this.

The flow chart you can download here shows how the board was reorganized by giving each director specific tasks within the association. At the moment, a particular focus lies on its newly established Scientific Committee which is building a bridge with the academic world in order to disseminate Risk Management know-how and techniques to the younger generation and to promote the FERMA/BELRIM Prize to students.

Last year, the BELRIM website got a complete make-over and today the first digital newsletter is launched in an effort to increase the association’s visibility within its member community and beyond.

Contacts with neighbouring risk management associations have been increased and NARIM and AMRAE have joined forces with BELRIM in setting up common activities.

Gaëtan is looking forward to steering the association to the end-of-year celebration of its 40th anniversary and counts on every single member to play an active role in BELRIM’s success story.

“Often the difference between a successful person and a failure is not one has better abilities or ideas, but the courage that one has to bet on one’s ideas, to take a calculated risk – and to act.”
–Andre Malraux